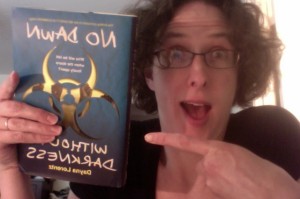 No Dawn Without Darkness has been OUT THERE for ONE WHOLE WEEK! I hope you enjoyed/are enjoying/plan on enjoying it!

I have made a playlist for all the books in this series: one for No Safety, which was heavily linked to the plot, and one for No Easy Way Out, which was a little looser in terms of how it related to the story. I’ve been working for over a year—no joke, I basically start making the playlist when I start writing the book—on the playlist for No Dawn, and it’s been super tough to get it right. I’ve been tinkering down to the last second! So here are some of the songs that resonated with me in writing the book:

The YouTube video for this is bizarre. That aside, this is the creepiest rendition I’ve ever heard of an already pretty creepy Depeche Mode song. For those of you who’ve read this blog for a while, you know that I’m a huge Depeche Mode fan. It’s the soundtrack to my teen years. I love them. And I love this cover by Rammstein!

Rammstein’s version captures the absolutely terrifying place I left the characters in at the end of No Easy Way Out. It’s scary. It’s dark. Things have gone from Bad to the nastiest neighborhood within Bad, the one everyone goes out of their way to avoid. Just the opening growl of this song takes me to that place.

I love the tough girl vibe of this song. This totally captures for me the fight-or-die feeling the girls in the book express. I don’t want to say too much, spoilers and all, but this song kicks ass, like my girls kick ass.

Certain characters have gone over to the so-called dark side. And feel pretty damn good about it… (This video, though, is totally bizarre…in it, we see the overwhelming effect of Avenue Q on media…;)

This song is the musical incarnation of the having to face reality and deal with it moment. There’s a kicking butt aspect to it. I’m all about girls kicking butt.

This song feels like a heart pounding in the dark, and also captures a certain character’s confusion about how to define him/herself.

Certain characters engage in some dirty deeds in this book…

Well, I just love this song. Plus, it’s about coming together. And it feels kind of kick butt in its own way. And have I mentioned my penchant for butt kicking?

8. “When the Levee Breaks,” Led Zeppelin

Honestly, this song just felt right at this point. And the proverbial levee does break in the book…

I’d love to hear what songs you think of after reading the book. Create your own playlist and share it with me in the comments. I can’t wait to hear from you!

7 Responses to “A Playlist for No Dawn Without Darkness”